Now with a routine and an understanding of how each day works, this morning was a sensational day to be woken up to. With breakfast down and the sun shining ever so brightly you could feel the buzz of the guests eagerly scattering to their areas ready to start the day’s excursions.

AM: We could not believe our eyes when we arrived into the Errera Channel with Danco Island in our sites. The sheer size of the stunning blue icebergs even more impressive than ever before were just jaw droppers!

Time to set sail on our zodiacs and start cruising around Danco Island. Danco Island or Isla Dedo is an island off Antarctica, 2 kilometres (1 nmi) long lying in the southern part of Errera Channel, off the west coast of Graham Land.

Danco Island was the location of the British research Station O. It was active from February 26, 1956 to February 22, 1959 with the intention of searching in the survey and geology. The main hut was named Arendal and was demolished and removed by British Antarctic Survey in April 2004.

This morning was really about getting up close to these giant glaciers, an area known for them to be captured. Each iceberg displayed magnificent shades of blue and interesting patterns based on weather climates they had experienced.  It was soo peaceful out here, you could see the paddle boarders in the distance with glacier backdrops, the kayakers getting up close to rock and ice formations while taking photos of weddell seals basking in the sun. We thoroughly enjoyed our ride with Michelle bouncing our zodiacs through the chunks of ice floating about. We were fortunate enough to see a Cormorant land on a particularly blue iceberg; he was a curious one and also chased one of the other zodiacs, not usual behaviour from such a bird.

Off the zodiacs and onto land…my oh my were we in for a treat! Little did we know how special this landing was going to be? A highlight of the itinerary for sure and noted in Quark itineraries. Here we interacted with a Gentoo colony located up a small hill. Amid the serene silence of Antarctica where noisy interludes become indelible memories, seeing the penguins squabbling over prized pebbles, chasing each into the water’s edge or up and down the hill. This was a magical place you could interact while watching them go about their daily being. The chicks chasing down their mum for a feed were pretty hilarious! However, the experience that takes the cake was when I found a piece of shoreline on my own and sat myself down with distance, and took in their each and every movement…right up until to my rather surprised moment of being shocked by 2 penguins trying to peck at my bottom.  The sneaky fellows came up from behind and nearly toppled me over with surprise. They truly are curious creatures and words cannot describe how wonderful this moment is when you are ‘touched by a penguin’.

Time could not have been delayed long enough to keep taking in this beautiful day. I hiked the hill and viewed back on the colony with giant glaciers and icebergs with their backdrop. Just breathtaking.

Neko Harbour was discovered by Belgian explorer Adrien de Gerlache during the early 20th century. It was named for a Scottish whaling boat, the Neko, which operated in the area between 1911 and 1924.[

Here we experienced our ‘7th continent landing’ a very special moment for most of the guests really! Oh gosh…so much to tell. Here we had a MASSIVE moving glacier as the backdrop for another nesting penguin colony.  So many chicks losing their fluffy coat. Again I had penguins nibbling at my legs.   On this landing we had to be careful and stay away from the shores edge.  Lucky for us, we watched a huge piece of ice calve off of the glacier and create a Tsunami wave. Certainly a WOW moment. Another great view from the top of the hill looking back into Neko Harbour, the colony and the glacier.

With light closing in, it was time to hit the zodiacs and experience some brash ice.  You could feel the sea ice closing in as we had lost the sun and really started to feel the cold.  Our first close encounter with a Minke whale. What a friendly guy he was…so curious and kept coming back to our boat.  He or she…came right under our zodiac.  We could see every pattern and colour on that Minke’s skin it was so close.  We saw some crab eater seals hanging about some ice and took 5 minutes to turn the zodiac off and just float…..Here we were truly on our own feeling incredibly small, the sounds of nature at its finest.  So silent, yet loud at the same time. 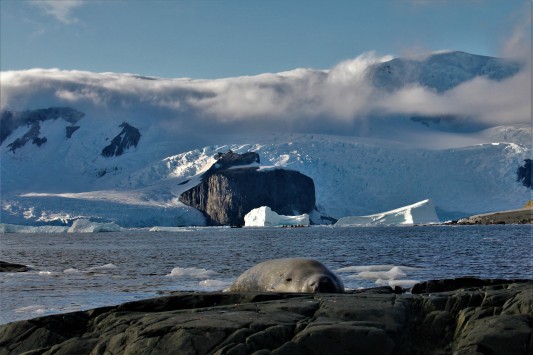 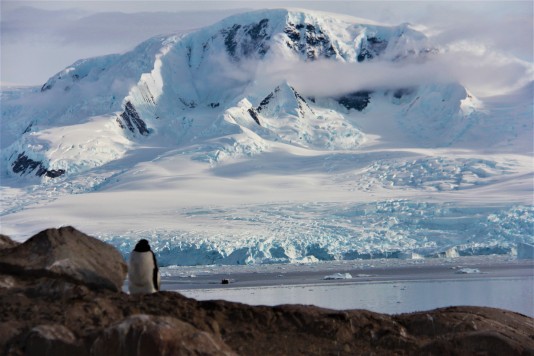